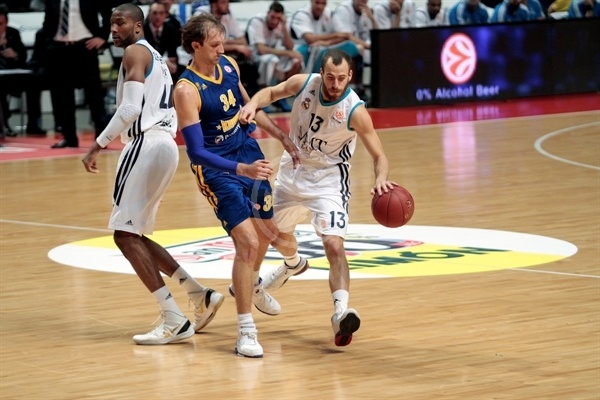 Khimky MR – Real Madrid / Euroleague – Fourth-placed Real Madrid (10-6) play in the seventeenth round of the Euroleague away to the returnee in this competition, seventh-placed Khimky MR (9-7). In the 5th round Khimky won an away win over Real Madrid. Khimky is one of the rare teams that has a positive record against Real and defeated Real in the two out of a total of three recent away matches in Madrid. They are in the lead with the score 5-4, but were defeated in the last home match against Real in February 2016.

Khimky MR
Led by the brilliant Shved, Euroleague’s first shooter, Khimky defeated 86:80 in the first match away. Thus, they have also announced that they are ready in the current season for the fight for the playoff. Shved scored 20 points and five assists, while Anderson 16, Gill 12 and Thomas scored 11 points. In the last round, they recorded a 74-70 victory at Bamberg after CSKA’s “away defeat” and Barcelona’s home defeat. Shved was the most efficient with 28 points (six assists and three rebounds), but Thomas scored 16 points, seven rebounds and three assists, making him the 16th round MVP player.
In addition to the first shooter Shved (21.8 points and 4.4 assists) Khimky also has the first rebounder Robinson (7.8 rebounds), which is injured, which is a great disadvantage. Robinson also scored 11.4 points. In the VTB league, from which they can reach the Euroleague for the next season, they do not perform any commendable performance. In the last round, they were also defeated at Kalev / Cramo (84:92, Shved 30 points and six assists), so that they are with the score 6-4 only placed fifth. After this match all were punished in the club and they were deducted 50% of the monthly wage. However, they could get the money back if they improve their results and achieve the goal.

Real Madrid
After three consecutive defeats in the Euroleague, the last of which had to be taken at Olympiacos after renewals, Real has not been defeated for more than a month. They brought 10 wins in a row, including in all five away matches in the Euroleague and Endesa Liga (with the score of 14-1 they are convincing championship leaders). In the last round, they also outclassed Joventut 84:66 away. With 18 points, the young Yusta was the most efficient, while Thompkins scored 11 points and nine rebounds.
While coach Lasso is waiting for the recovery of Llull, Kuzmic, Randolph and Ayon, he counts on many more players, so now they do not just depend on Doncic. Doncic continues to be the best in the team (18.1 points, 5.6 rebounds and 4.8 assists, efficiency of 25.1 points) and also the most effective player in the Euroleague, while Campazzo has really improved his form. He was the best in the last 93:81 home win over Maccabi TA with 13 points, four rebounds and assists alongside Reyes (14 points and five rebounds). Doncic scored 11 points, four assists and three rebounds, while the Travaers got 10 points and 12 rebounds.